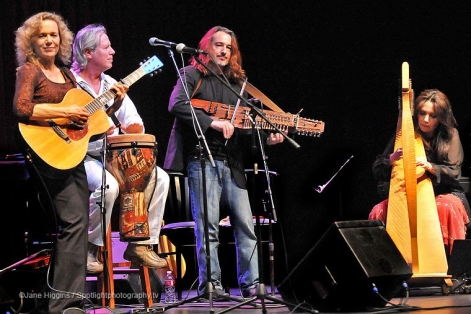 Every year around December I do shows with the Windham Hill Winter Solstice. These concerts were so popular that they still exist around the country. Sometimes its Barbara Higbie, myself (and I bring George and Aryeh) and pianist Liz Story. Sometimes the artists alternate and it may be guitarists Wil Ackerman or Alex DeGrassi. However it goes, its a wonderful show that always sells out. We even do smaller shows together  if time permits in various combinations. The last couple of years we missed a few dates since we were touring with Patrick but this year we get to jump on for some dates in Northern California.

Three captivating artists who rose to fame recording for the Windham Hill label come together to celebrate the wintry holiday season. The dreamy Windham Hill “new age” image doesn’t do justice to the passionate singer, pianist, fiddler and guitarist Barbara Higbie, whom writer Derk Richardson described as “a jazz pianist who can write and sing like Laura Nyro and Carol King, a prize-winning folk fiddler who will interpret a John Coltrane tune through a French vocal or add her own lyrics to one of Django Reinhardt’s last compositions.” Higbie, whose musical associates have included Bonnie Raitt, Bobby McFerrin and Carlos Santana, put together this Winter Solstice ensemble with Grammy-nominated pianist Liz Story, whose original compositions draw on influences as various as Claude Debussy, Scott Joplin and Joni Mitchell, and renowned Celtic harpist Lisa Lynne. “It’s a show made for people who want to celebrate the season in their own unique way,” Higbie says.